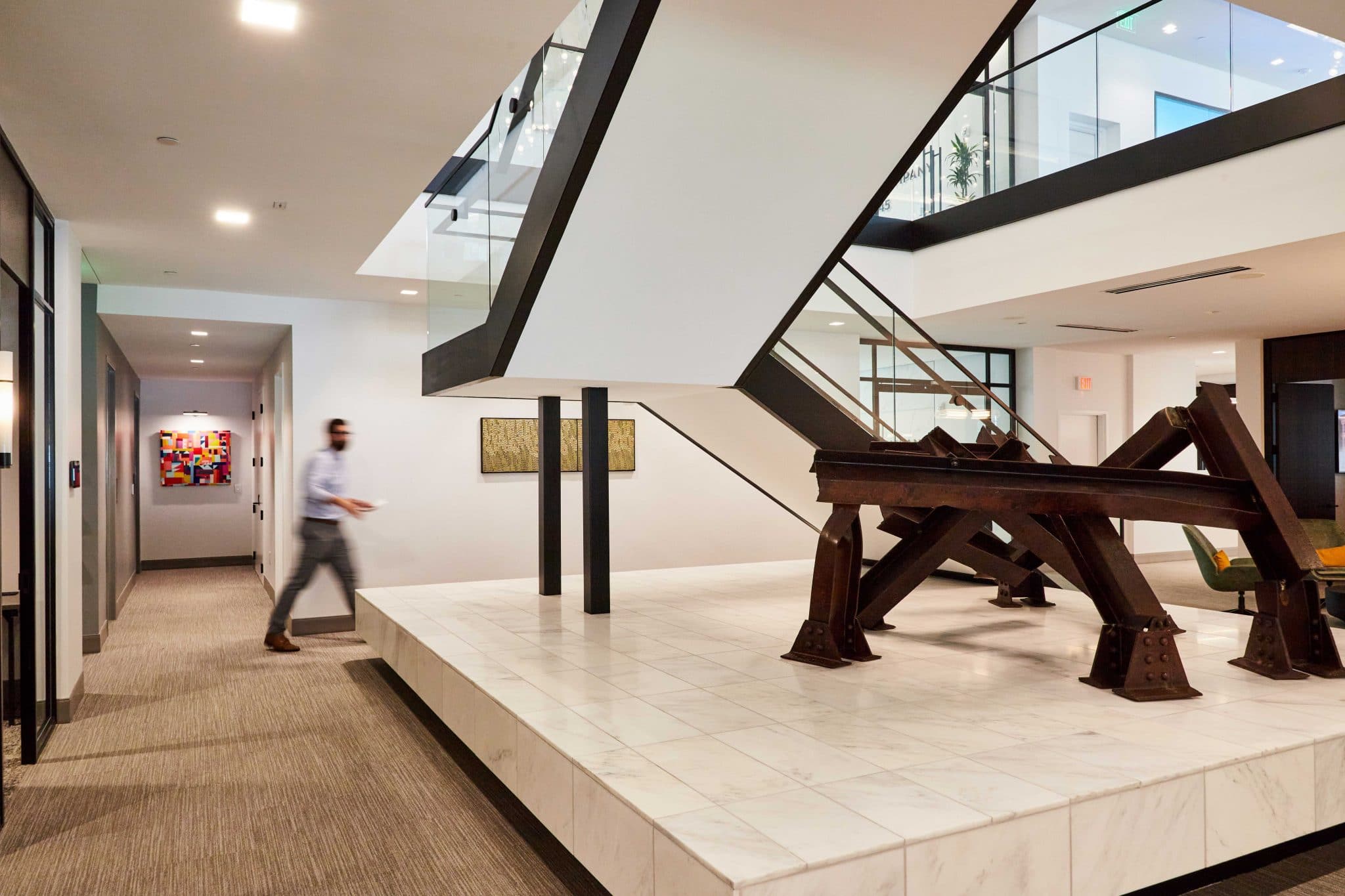 At the center of The Beach Company headquarters offices in The Jasper stands a 600-pound relic of the site’s history. Sixteen steel H-beams, ranging from a few inches to 7 feet each, from the former Sergeant Jasper Apartment building were expertly designed to connect the past and present in Sergeant Jasper Redeux.

Housing downtown Charleston residents for more than 60 years, the Sergeant Jasper Apartment building was demolished in 2018. Materials that could be salvaged, were, including the former apartment’s steel structure. Commissioned by The Beach Company, sculpture artist Bob Doster of Lancaster, SC, transported a handful of the deconstructed H-beams to his upstate studio to give them new life. “The goal was to create a pleasing shape with the pieces that had some interest,” says Doster.

He began the project by creating mockups with lightweight steel, designed to scale. The 100+ pound beams were placed by crane then torched and bolted together to create the final piece.

“When you walk around the structure, you don’t see the whole thing at once – the design changes depending on the angle you’re viewing,” says Doster. “You see triangles, squares, rectangles and negative space.”

Now placed where it once stood for so many years, these repurposed structural components of TBCs first landmark building represent the vision, strength and progress of this 75-year-old business.

Bob Doster is an award-winning, nationally acclaimed artist who has been creating and teaching for more than fifty years. Prestigious awards include SC Governor’s highest recognition in the arts: the Elizabeth O’Neill Verner Award. Doster has been named Keeper of Culture by the York Heritage & Cultural Commission, Hero of the Child by SC First Steps, Small Business of the Years by Lancaster County Chamber of Commerce, CN2 Hometown Hero and received City of Lancaster Mayoral Proclamation.

Doster has been featured in publications and broadcasts including Southern Living Magazine, Carolina Arts, Sandlapper, SCETV, Arts Hub, National Welders Magazine, and a myriad of newspapers and travel magazines. His works can be found in museums, galleries, public art, corporate and private collections worldwide.

In addition, you can visit almost every school in SC (and many beyond SC) to find works created by students during artist residencies with Doster.

View more from the artist at http://bobdoster.com/
Return to The Jasper’s full art collection