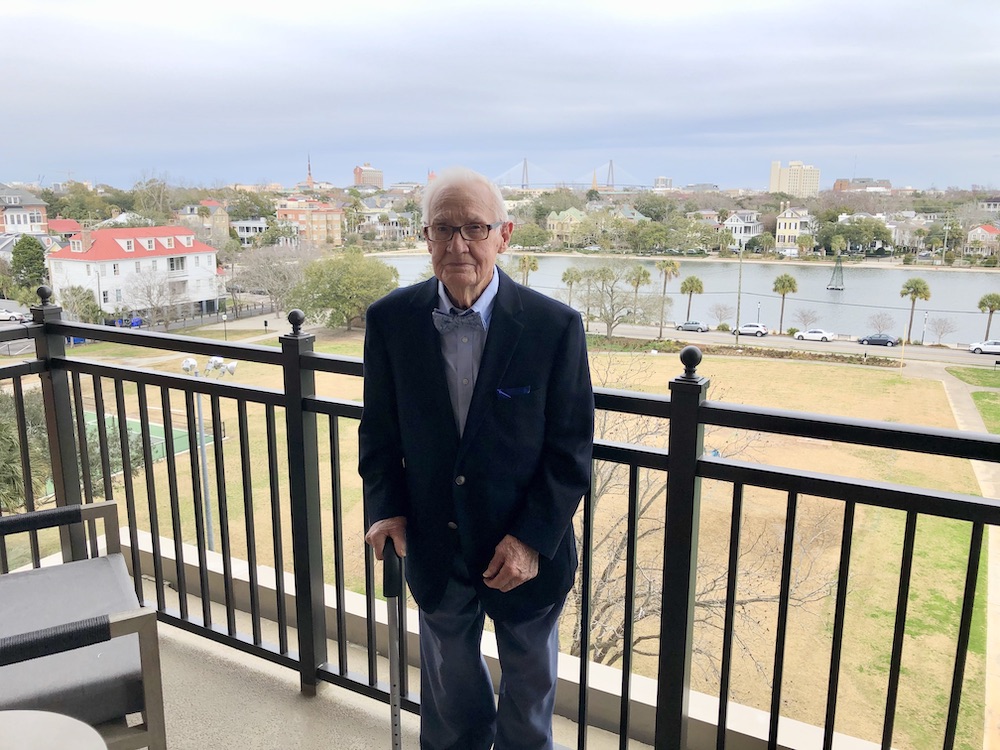 For his 97th birthday, Herman Clark requested two things: a nice sandwich for lunch and a trip to The Jasper.

His wishes were granted when his birthday lunch was followed by a tour of the new building, 70 years after hammering hot rivets into Sergeant Jasper, which once stood where The Jasper was built.

His impression of The Jasper for the years leading up to its completion was of pure amusement, curiously watching how construction had evolved since his work on the former site.

Herman still recalls working alongside his friends as a structural steel worker on Sergeant Jasper’s construction team when he was 26 years old. Before he got the call to come down to the Port City, he had served in World War II and was living in Virginia. After moving to construct Sergeant Jasper, Herman planted his roots and built a family here, which is one of the many reasons why the building and his time here is so important to him.

His sons, Randy and Wayne, joined him for a tour with friends from The Beach Company, Korey Smith, a development associate, and Kelsey Jordan, The Beach Company marketing coordinator, who met the former construction worker through his son Randy.

Herman had waited a long time to finally see the inside, and on his special birthday, his wish was granted.

Arriving in the grand lobby, Herman admired the neoclassical architecture and tall arch of the entrance as he walked inside the light-filled room.

The interior design was strikingly different than the Sergeant Jasper Herman compared it to.

The only thing he recognized was the view when he stepped out on the balcony of a one-bedroom unit facing Colonial Lake with the Ravenel Bridge in the distance. Affectionately, Herman gazed across the Charleston skyline.

“The view from the top of Colonial Lake is beautiful, I haven’t seen that in 70 years,” he shared.

After finishing the tour at the rooftop pool deck, Herman enthusiastically posed for a photo with the Ashley River in the foreground.

He was wearing his Sunday best suit and bowtie as he shared, “I never saw a building as beautiful as this one is. I’m surprised that I’m even able to see a building… I really appreciate you taking me.”

Herman plans to visit again in the future, and says he’ll continue to admire The Jasper on his drives around the city.